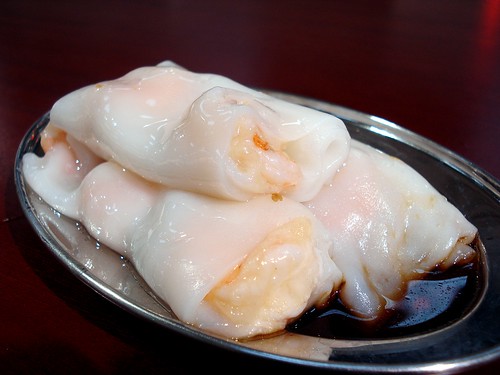 I've mentioned cheung fun (腸粉/cháng fěn) before, in my post on 粉/fěn. These white, floppy, slippery noodles are considered to resemble intestines, particularly when rolled up to serve, and hence are literally named "intestine (腸) noodles (粉)".

Cheung fun are generally served in portions of three, rolled around fillings such as char siu pork (叉燒腸粉/chā shāo cháng fěn), beef (牛肉腸粉/niú ròu cháng fěn), fresh prawns (鮮蝦腸粉/xiān xiā cháng fěn — pictured above), or scallops (帶子腸粉/dài zi cháng fěn). Many places will also offer "three treasures" cheung fun (三寶腸粉/sān bǎo cháng fěn), which includes three of the above fillings, one in each roll. You don't get to choose the fillings here, and the menu doesn't usually specify which ones you'll get, but beef+pork+prawns is not an uncommon combination.

Vegetarian cheung fun options are actually surprisingly common, given how tricky it can sometimes be to find vegetarian dim sum — the noodles themselves are vegetarian by default, which helps. The most ubiquitous vegetarian 腸粉 filling is probably fried doughsticks (油條/yóu tiáo, literally "oil sticks"). On most if not all of the dim sum menus I've seen in London, fried dough cheung fun are listed as something along the lines of 炸兩腸粉 (zhà liǎng cháng fěn). I'm not entirely sure how to translate this — 炸 is deep-fried, and 兩 means something like "pair" or "couple", so perhaps it's a reference to the carb-in-carb nature of the dish, or maybe to the fact that you usually get two 油條 per roll?

Sometimes 腸粉 will arrive already cut into pieces (photo), while other times they arrive whole (as shown above) and you have to cut them up yourself. The doughstick-stuffed variant usually comes pre-cut, since it's not too easy to cut through the doughstick filling.

You can, I am informed, make cheung fun at home. I've never done this, but if you're interested in trying it, it's worth looking at the eGullet thread on the subject, as well as these recipes by Lily Ng, by Alison Foo, and by Feast To The World; and here's a video (which is in Cantonese, with English captions for the important bits). Note however that both recipes and video include extra flavourings (spring onions and dried prawns) in the batter — if you're making filled cheung fun like you get in restaurants, you'll want to leave these out and make plain noodles. The spring-onion-dried-prawn variant is usually served unfilled.

A final note for Londoners: Lo's Noodle Factory and See Woo in Chinatown both sell fresh cheung fun to take away and reheat at home, but they only stock the spring-onion-dried-prawn version as a rule. Lo's will do the plain ones if you order in advance, but you'll need to buy at least five or six packets, which is rather too much for a single household — they don't keep well. The best way I've found to reheat purchased cheung fun at home is in the microwave (steaming works too, but is slower and no better than microwaving).

serene
I love those things! I buy them frozen and my family hates them, so I get them all to myself, bwa ha ha!

kake
Ooh, I didn't know they came frozen. Are the frozen as good as fresh?
From: (Anonymous)
Hi
Can you cook (steam) them direct from frozen ?

pulchritude
The thought of eating 油條 in 腸粉 horrifies me...

kake
It's not my favourite either (that would be scallops). A lot of people seem to like them, though!

watersword
These are some of my favorite dim sum pieces. Even if they do fight back. *g*

eatlovenoodles.blogspot.com
My favourite dim sum. If it was up to me, you wouldn't be allowed to call yourself a dim sum restaurant if this wasn't on the menu. I love zhaliang but one to avoid is the beef, it's usually a bit crap. You can also get plain cheung fun with no filling and I've seen it filled with enoki mushrooms albeit in China.

kake
Ah-ha, yes, I remember you mentioned this on your post about old-school dim sum (which I'm going to link again because I really like it).

I feel like a bit of a coward for not actually having tried making my own cheung fun yet! Maybe I'll give it a go some time, particularly since as of this week I now finally own a wok steamer.

I remember I had grilled cheung fun with XO sauce at Dragon Castle last year, but I can't remember if they were plain or not.
From:

eatlovenoodles.blogspot.com
Don't feel a coward - making cheung fun is a very technical skill and one in which a prospective dim sum chef has to master before qualifying as a fully fledged dim sum sifu (master).
Flat | Top-Level Comments Only