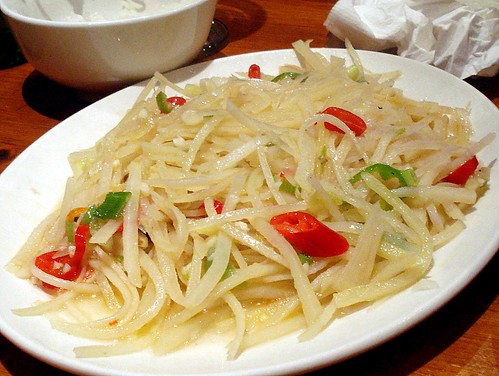 First, I want to apologise for how abruptly I put this blog on hiatus a couple of months ago. Something came up without warning in my personal life, and I needed all my attention free to deal with it. Things have still not been put right, but at this point it seems unlikely they ever will be.

I'm bringing the blog back to life today, specifically, because the schedule was interrupted between a Wednesday (character) and a Friday (dish) post. On the Monday I posted about potatoes in Chinese cuisine, on the Wednesday I posted about 絲/sī/thread/fibre/shred, and today I'm posting about 土豆絲 (tǔ dòu sī), or shredded potatoes.

As I mentioned in the Monday post, potatoes in Chinese cuisine are treated more like an ordinary vegetable than like a staple carb, and so it would not be unusual to see a potato-based dish served with rice [see footnote]. For the same reason, the potatoes tend to be somewhat undercooked to Western tastes. Both of these characteristics apply to 土豆絲 — it's a fresh, crisp stirfry of very finely shredded potatoes that have been soaked in water before cooking, to remove as much of the starch as possible.

I've seen 土豆絲 on menus both as a cold dish (涼菜/liáng cài) and as a hot dish (熱菜/rè cài), and listed under a variety of names. Cold-dish versions I've seen include 涼拌土豆絲 (liáng bàn tǔ dòu sī) and 熗拌土豆絲 (qiàng bàn tǔ dòu sī); the former of these means something like "cold mixed shredded potato", while the latter replaces the character for cold (涼) with 熗, which has baffled me in the past, but may mean something like "pungent". Sometimes 嗆 is used instead of 熗; both are pinyinised as qiàng.

Making this dish at home is quite easy, as long as you have decent knife skills — the hardest part is cutting the potatoes into those fine slivers. Alternatively, you could use a mandoline if you happen to have one. Do note that you won't need nearly as much potato as you would for a Western potato dish; around one medium-sized potato per person is ample. Like most of the dishes I post about here, this should be served with several other dishes as part of a meal; you wouldn't just eat a big bowl of it by itself.

As suggested by the plethora of names for this dish listed above, there are many variations on how to make it. Beijing Made Easy has a nice basic recipe containing just potato, dried red chillies, oil, soy sauce, vinegar, and salt; while mmm-yoso's version adds Sichuan pepper. Charmaine Mok's version adds garlic, Travel China Guide's rendition uses ginger and green peppers (in addition to the chillies), while Sunflower's recipe even includes carrots and preserved vegetable (榨菜/zhà cài) for extra flavour. I can personally vouch for Charmaine's recipe, served either hot or cold, though I use groundnut oil for stirfrying instead of sesame oil, and add some ground Sichuan pepper just before serving.

Some of the above sources describe this dish as coming from Sichuan, others from Beijing. Recipes Tap mentions that Fuchsia Dunlop's Hunan cookbook includes a version, and indeed it also appears on the menu of Golden Day, a Hunan restaurant here in London. There are more thoughts on the distribution of potato use within China in my previous post on potatoes.

Footnote: [0] See also 螞蟻上樹/mǎ yǐ shàng shù/ants climbing a tree, which is a noodle dish that's often served with rice rather than as a carb per se.

tim
You wouldn't just eat a big bowl of it by itself.

(I've only ever had it at Muslim Chinese restaurants -- have never been able to bring myself to make it, since I've assumed it wouldn't come out right without a proper wok.)

kake
I think it would be fine made without a proper wok — you don't really need to develop "wok hei" for it to be tasty, so cooking it in a flat frying pan would be just fine.

I was quite surprised by how much I liked it when I first tried it, since I'm generally not a great fan of potatoes!

trouble
I did miss you! :D

eatlovenoodles.blogspot.com
I like these potato dishes but I agree that they're better for sharing, as on the one occasion I bought a portion for myself, it got very samey.

Anyway, it's good to have you back! We must catch-up soon.

kake
We certainly must. I'm overdue a revisit to Royal Palace, if you fancy that.
From:

kake
Coincidence indeed! What did you have with it?

kake
:)
From: (Anonymous)
These are my notes on the '熗' character

Meaning: stir-fry then cook with sauce and water; boil food quickly then season with soy

Also: to choke; to irritate (as the throat, for example).

Your translation as 'pungent' does closely match the 'choke' or 'irritate' meanings but I got the more cooking related translations from the Yellowbridge Dictionary and they seem pretty apt.

trinker
Oh my goodness. You've just explained why my (Japanese) mother cooks her potatoes like that. I always thought she was bizarrely attached to crunchy vegetables to the point of fanaticism. I never gave her credit for doing it as part of a recognized *style*. (I don't think I'll like it any better for knowing that. Crunchy potatoes just seem wrong to me!)

May I post a link to your journal over in LJ, variously at some language comms, and a few friends who would love to study Chinese menu reading as well?

kake
Oh, yes, please do link wherever you like! The more people reading, the more people there are to point out any mistakes I may make :)

trinker
Marvelous. I'm so glad you're doing this.
Flat | Top-Level Comments Only