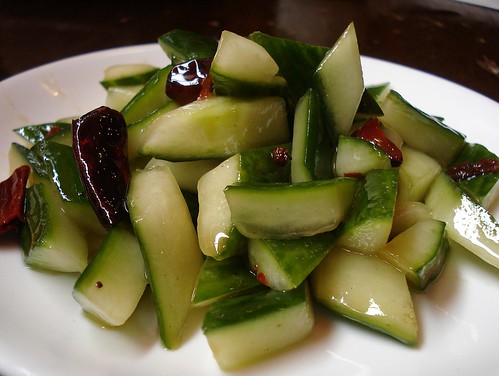 When I first moved beyond Anglo-Chinese takeaway food and started learning about proper Chinese cuisine, one of the many pleasant surprises I had was how tasty and refreshing the cold dishes (涼菜/liáng cài) can be. Indeed, most of the Chinese-language menus I've seen are divided primarily into cold dishes and hot dishes, and these arrive together rather than in strict cold-then-hot sequence. You can even make up an entire meal from cold dishes, if you like; Beijing Haochi has a nicely-illustrated paean to the joys of 涼菜, describing just that.

Certain of my regular dining partners disapprove of my penchant for ordering 黃瓜 (huáng guā/cucumber) dishes in Chinese restaurants, claiming that the markup on these cheap, simply-prepared ingredients is unjustifiable. I do see their point, but I really enjoy the crunch and contrast in amongst the more intensely-flavoured dishes.

There are a number of styles of 涼拌黃瓜 (liáng bàn huáng guā), which literally translates as "cold mixed cucumber". The photo at the top of this post illustrates one I ate at Baozi Inn in Chinatown; the cucumber is stirfried ultra-briefly (10-15 seconds) in oil flavoured with dried red chillies, and marinated with vinegar, sugar, and a few spices. Alice de Jong has a recipe for this style; she calls it 黃瓜皮 (huáng guā pí, literally "thin sheets of cucumber"), while Baozi Inn calls it 炝黃瓜 (qiàng huáng guā), with the 炝 describing the very brief cooking of the cucumber in the flavoured oil.

Another option is the rather fun (and garlicky) 拍黃瓜 (pāi huáng guā), literally "bashed cucumber". It's a bit messy to make (I ended up with cucumber innards in my hair the first time I tried), but also kind of satisfying if you've had a tough day. The basic idea is that you cut the cucumber into wedges and then bash it with the side of a cleaver (or a rolling pin) to break it up and make it easier for the garlicky dressing to soak in. Here are some recipes: Beijing Haochi, Lily's Wai Sek Hong, Planting Bamboos.

I'm also keen on the spicer forms of cucumber dish; the photo below is of the 蒜泥黃瓜 (suàn ní huáng guā) served at Chilli Cool in Bloomsbury; although the name translates simply as "cucumber with mashed garlic", it's spiced up with hot chilli oil and loads of Sichuan pepper. I don't have a recipe for this yet, but I'll certainly be experimenting. 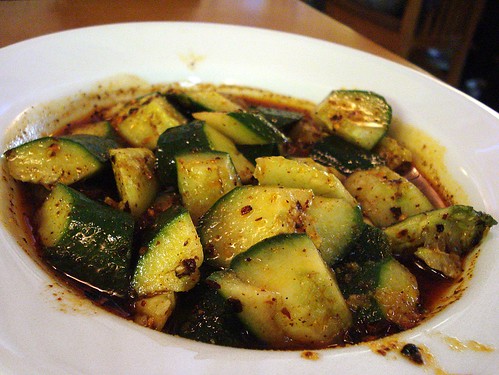 As it is cucumber season in the NE US now, and I have a bag of Sichuan pepper to use up, I see some cooking plans in my future....

julietteculver
I remember having an amazing cucumber salad at a Malaysian Chinese friend's house many years ago along with other Chinese food. Had completely forgotten about that - interesting to know that they are common in Chinese cuisine in general.

kake
I don't know if you remember how much I used to hate cucumber... but I'm pretty sure I have Chinese cuisine to thank for helping me get to like it!

There are loads of other great cold dishes and salad-type things that I'll be posting about in the future.

trinker
Oh, I didn't know you were at eGullet! I don't merge my offline and online names as much as I used to, so I'm not posting in that discussion that popped up today...but do you have a link to the *celery* version of this sort of thing? I encountered a lovely (blanched?) celery appetizer when

arboretum and I went to a dumpling place recently.

kake
Yep, I follow the China forum on eGullet (and occasionally read a couple of the other forums). Some of the discussions on there are very useful.

I've seen celery cold dishes (usually celery with peanuts) on quite a few Chinese menus, but I've never ordered one, so I'm not sure how to go about making it. I did find this recipe in Chinese, which I think I have just about managed to make sense of with the help of the Google Translate version. I don't know whether you read Chinese, so maybe you can decipher it better than me, but I think what it says is to simmer 1 cup of red-skinned peanuts for 40 minutes in 2 cups of water flavoured with 1 package of stewing spices (滷包 — Google image search is informative), 2 pieces of star anise (I think they have ハ where they mean 八, which is confusing Google Translate), and 1 tsp salt, then drain them and mix with chopped celery (either raw or briefly blanched) and dress with sesame oil.

kake
I just stumbled across a NYT recipe for celery and tofu salad which may be of interest — there's also a brief related article.
Flat | Top-Level Comments Only